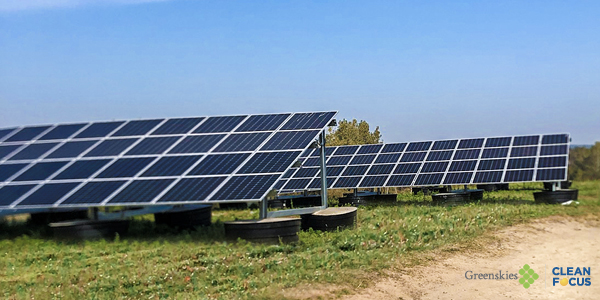 EAST HAVEN — Five acres of otherwise unusable land has been turned into a moneymaker for the town in the form of a solar panel array that will provide energy to several municipal buildings, including East Haven High School.

“This new solar array is a win-win,” Mayor Joseph A. Carfora said in a statement announcing the project’s completion. “We’re saving on electricity costs and generating income from under-utilized land. Plus, we’re helping build a more sustainable and energy-efficient Town.”

The town has a 20-year lease agreement and a no upfront cost, power purchase agreement with Greenskies Clean Energy LLC, which over those two decades is expected to save the town about $1.4 million in electricity costs and additional revenue in annual lease payments.

The Town Council voted to approve entering a lease with Greenskies for the landfill property in 2017. At the time, Greenskies agreed to pay the town $15,000 per megawatt generated at the site yearly, and the one-megawatt solar farm would generate about $700,000 in revenue for the grand list of taxable property.


Through the state’s Virtual Net Metering program, the town will credit the energy produced by the solar installation against several town buildings — not only the high school, but Grove J. Tuttle Elementary School, the town Recreation & Athletic Complex and Police Department.

Greenskies was responsible for the development, and the 1.17-megawatt array at 240 Commerce St. is now complete and operational, said Domonique Bedbury, a marketing manager for Greenskies.

The project on the capped East Haven landfill consists of about 3,000 solar panels. The town’s Transfer Station remains intact for recycling.

Greenskies is an experienced brownfield solar developer with more than 27 megawatts of solar landfill projects on 14 sites in Connecticut and Massachusetts, including Fairfield. Its panels are on both municipal and commercial properties in 30 Connecticut communities and at Connecticut highway rest stop areas.

Another 15 projects are in various stages of development in New Haven County.

In addition to the financial benefits, the East Haven project is expected to generate upward of 1.64 million kilowatt hours of clean, renewable energy yearly, according to the company. Over its lifetime, the project will offset more than 19,500 metric tons of carbon dioxide, said to be the equivalent of taking more than 4,275 cars off the road, according to the Environmental Protection Agency’s Greenhouse Gas Calculator.

Greenskies and its sister company, Clean Focus, were founded in 2009.